Time to play catch up.  Three books, one post, because I’m all about customer service. 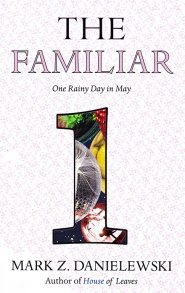 Mark Z. Danielewski, The Familiar, Volume 1: One Rainy Day in May. After thinking about this one for a couple days, I came to the realization that Mark Danielewski may very well have written a book that’s unreviewable. This isn’t to say that it’s bad or that the content somehow puts the book outside the scope of a review – it’s just clearly incomplete. There are, to date, at least two additional volumes in Danielewski’s latest endeavor (with more to come, I think), and Danielewski being Danielewski, the first volume makes very little effort to tell a satisfying story with a conventional narrative arc. Usually the first book in a series sets the stage for what’s to come: introduces the characters, gets all the expositional business out of the way, ramps up the conflict, and so on. What the first volume of The Familiar is, instead, is a series of stories that I suspect will interlock at some undetermined point in the future. For now, we get only a taste of what’s to come: an epileptic girl who may have powers of healing; a Latino gang member; a couple on the run from government agents; a frankly incoherent story featuring (I think) Thai or maybe Korean characters speaking in a patois so thick I couldn’t really figure out anything that was happening.

And all of it is written in typical Danielewski style, with experiments in font and text placement, illustration and color, and shifts in perspective. It’s fun if you’re into this sort of thing (which I am), but anyone entering into it expecting a satisfying story is going to leave disappointed. But if you’re on Danielewski’s wavelength, there’s no way not to be really excited at the prospect of what’s to come.

Dave Eggers, Your Fathers, Where Are They? and the Prophets, Do They Live Forever? Your Fathers, Where Are They? works more effectively as a thought experiment and an exercise in conversational flexibility than anything else, which marks this as minor Eggers. It’s a fun little thing, and a quick, relatively breezy read, but basically Eggers sets out to answer these questions: Why are white males such dickbags? (and) What’s missing in their lives to make them so angry and unsatisfied despite the fact they’ve had every advantage a person could want? I mean, it’s a compelling question (especially as one of the white males in question), but I find books that set out to do this kind of heavy lifting usually fail as solid narratives because they’re primarily concerned with responding to a thesis instead of telling a story. This one isn’t a failure – Eggers is too talented for that – but where a book like Eggers’ masterful Zeitoun works because the message is embedded in its heartbreaking narrative, the message is the narrative inYour Fathers, Where Are They?, and once that becomes clear it’s hard to get involved in the plot when we know that plot is just a means to try and answer a question.

The plot, such as it is, revolves around a man named Thomas. He’s 34 and disaffected, angry about the shooting death of a childhood friend, and someone so unstable we learn he once tried to burn down a hospital to make a point. But now he’s kidnapped half a dozen people and chained them in separate buildings in a decommissioned military base. The book is told exclusively in dialogue, as Thomas essentially interviews them (with the threat of violence right below the surface) about a variety of topics. From an astronaut, he wants to know what it felt like to work toward a shuttle mission for his entire life only to have NASA defunded just as he was on the cusp of career success. From a congressman he wants to know how and why even politicians with the best of intentions get sucked into the bureaucratic machine. From his 6th grade teacher he wants to find out if he and his friend were molested as children. And so on.

Watching Eggers play with dialogue and perspective in this way is fun, even if, as I said above, it becomes less satisfying once we clue in to what he’s doing. It ends ambiguously, as it must, which is probably only going to annoy people who aren’t already on board. I think Eggers fans will enjoy the exercise, but for the uninitiated, Your Fathers, Where Are They? will probably be more frustrating than anything else. 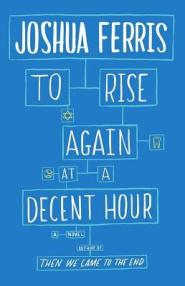 Joshua Ferris, To Rise Again at a Decent Hour. I mean, I don’t know. Clever is good, right? It indicates intelligence (I think) and a certain sense of humor (I think). I like clever. Monty Python, Christopher Guest movies, Michael Chabon. But it’s gotta be effortless. If I can see the flop sweat, it’s not clever, it’s work. And Joshua Ferris sweat all over this mofo.

For a while, To Rise Again at a Decent Hour read like a worthy successor toAnd Then We Came to the End, Ferris’ previous book, which I loved. Paul O’Rourke is a dentist with some impressive anxiety issues, an unhealthy tendency to get overly attached to the women in his life, and an obnoxious devotion to his atheism. As a guy of comparable age who shares all three of those traits, I could relate. And Ferris is funny and unusually perceptive at times. I love this quote, which is going to haunt me every time I head into the classroom with students who grow farther and farther away from my age with each passing year:

The 1980s were thirty years ago. The people now following [minor celebrities] Daughn and Taylor thought of the 1980s as I used to think of the 1950s. The 1980s had, overnight, become the 1950s. It was unimaginable. I might as well have been wearing a Davy Crockett hat and cowering under my desk for fear of a Soviet attack.

Then Paul discovers someone is posting as him online. First appears a website for his dental practice where there hadn’t been one before. Then a Facebook account. Then someone using his name on the Boston Red Sox fan forum he frequently visits. Then Twitter. And at first the postings are innocuous and full of non-sequiturs. But then they become fixated on Judaism, and an ancient sect of religious doubters called the Ulm, and the tweets and postings start to sound more and more anti-Semitic.

And that’s where things go downhill. I love a good conspiracy novel as much as the next guy, but I shouldn’t see the gears and cogs of the conspiracy’s machinery at work. In To Rise Again at a Decent Hour the machinery was so obvious and laborious I could practically smell the grease and feel the steam. Where before we got wry humor, we suddenly get entire pages that go like this:

The Ulms’ origins were well documented by references to those books of the Bible where the Amalekites were mentioned, from Genesis through the Psalms. It was said that the Greeks called the Ulms metics and were known to them as anthropoi horis enan noi, or “the people without a temple.” There was a list of ways the Ulms had been systematically suppressed since the advent of Christianity . . .

And on. And on and on. And on. By the end of the book I was bored with the whole thing. I didn’t care about what happened to Paul or his practice or any of the other characters, really. And it’s a good thing, because the book ends with a damp squib of a resolution. I don’t mind vague endings – I’ll go to the mat defending the end of the movie adaptation of No Country for Old Men – but you’ve got to give me something. In this case, there was a story, and then it was done.

How did this get short-listed for the Man Booker Prize? The mind boggles.