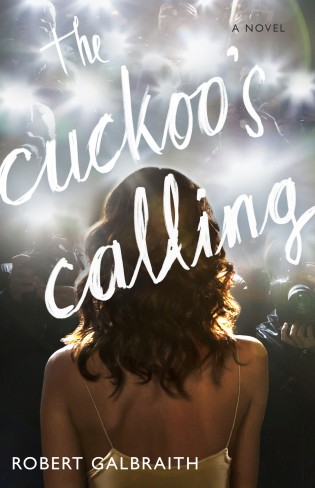 My attitude toward the Harry Potter series was nicely summed up in Jane Lynch’s recent interview with Marc Maron on his WTF podcast.  They described some of the various social events they’ve been invited to but declined to attend. “I’m sure it’ll be a lot of fun,” Lynch said. “I just don’t want to do it.”  And that pretty much captures my ambivalence about J.K. Rowling’s wizard.  I’m sure the books are good; great, even.  I don’t know a single person who doesn’t love them.  My wife has all the books sitting on her shelf, and I bought her the new one a month ago.  It would be so easy to pick them up.  I just don’t want to do it.  I’ve got too many books of my own to read to even consider committing to seven books and however many thousand pages Rowling’s series represents.  But when the three Robert Galbraith books – written under Rowling’s pseudonym – showed up on Barnes & Noble’s “cheap books” shelves, that seemed much more manageable.  A quick text to, and an enthusiastic recommendation from, one of my former students whose taste in mysteries runs parallel to my own clinched it.  My first experience with Rowling wouldn’t be with Harry Potter but with her schlubby amputee detective, Cormoran Strike, in The Cuckoo’s Calling.

Regular readers of this blog (or my Goodreads feed) might recall my love for two other U.K.-based mystery writers, Ian Rankin and Mo Hayder.  Their series – Rankin’s Edinburgh-set mysteries featuring D.I. John Rebus and Hayder’s grittier stories starring the tortured D.I. Jack Caffery – are, for my money, the best ongoing thrillers today.  So how does Strike stack up against Rebus and Caffery?  Not bad, although it feels as though Rowling is still growing into a genre she’s not yet comfortable with.

Strike himself is a compelling character.  Rowling hasn’t finished delving into his backstory, but we get enough of it here to want to know more. Illegitimate son of a groupie and a rock star, Strike served for a time in Afghanistan as part of the British military’s Special Investigations Branch.  While there, he was caught in an explosion and lost part of his leg.  He returned to England, resumed a highly dysfunctional relationship with his ex-girlfriend, and became a private eye.  When we first meet him he’s hit rock bottom, living out of his office and with only one client to his name.  In a fortuitous turn of events, he’s gifted a plucky new receptionist and a wealthy client on the same day.  Robin arrives fresh from the temp office, excited to be rescued from another stultifying turn in a cubicle.  The client, John Bristow, has a childhood connection with Strike: Bristow’s brother Charlie was Strike’s best childhood friend before dying in a freak cycling accident. Bristow has now arrived to ask Strike to re-investigate the alleged suicide of his sister, supermodel Lula Landry.

Strike begins his investigation with reservations, essentially taking Bristow’s money only because he’s deep in debt.  The case takes him through the pretentious upper echelons of London’s fashion scene, and Rowling has a lot of fun contrasting Strike’s hulking, disheveled bulk with the sleek, trim models and designers he comes into contact with.  Rowling’s obvious strength and the book’s great joy – and honestly, the one reason I’d be willing to check out the Potter series – is her dialogue.  Her characters come from a range of different ethnic and cultural backgrounds, and as a long-time Anglophile, I could hear the different regional dialects leap off the page.  The supporting characters are all finely drawn, from Bristow’s rodent-like obsequiousness to film producer Freddie Bestigui’s bullish thuggery to homeless addict Rochelle Onifade’s crude desperation.  And receptionist Robin – clearly positioned to play a larger role in the next two books – is the most fun of all, an adventurer bristling against her role as an office worker engaged to a banker.  From this book alone, it’s easy to see how Rowling created a world in the Potter series that people wanted to live in.

The larger problem with The Cuckoo’s Calling, however, comes from Rowling’s mishandling of some of the genre’s tropes, which may simply be attributed to a first-timer’s rustiness.  A lot of the plot – and you can see it from the very start of the book, when Robin and John Bristow both arrive on the same day Strike is rendered homeless – hinges on coincidences and lucky twists of fate.  Rowling’s book is no less meticulously plotted than Rankin’s and Hayder’s books, but unlike those two writers, the internal logic she employs isn’t as consistent.  In Rankin’s Rebus series, you can clearly see how each plot twist rises organically from character and motivation.  In The Cuckoo’s Calling, certain plot points emerge only because Strike was in the right place at the right time or was able to make some enormous intuitive leap based only on an offhand comment.  And then there’s the book’s lazy climax, where Strike explains the entire case to the villain and waits for him to confess on a pocket recorder.  It’s a variation on what Roger Ebert called the Fallacy of the Talking Killer, where, at a movie’s climax, the bad guy could easily kill the hero but instead wastes valuable time explaining his motives, which of course causes him to be captured.  The generous view is that Rowling is paying tribute to classic mysteries where this kind of thing was normal.  The more critical view is that she just wasn’t sure how to bring the various plot threads together in any way other than the most straightforward.  No matter which view is correct, the climax doesn’t really work.

All of which is to say – as I usually find myself doing – that I didn’t dislike the book.  It’s a fun, fast read, and the dialogue alone makes it worth your time.  To be fair, the degree to which Rowling grows into these characters and this genre might cause me to modulate my criticism later.  It’ll be increasingly difficult to view this book’s flaws generously if they continue into the next two.  But again, its rocky final chapters notwithstanding, The Cuckoo’s Calling is strong enough overall not to feel exceedingly optimistic about the series’ promise.