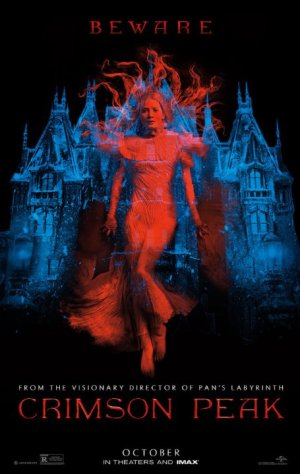 “It is a monstrous love.  And it makes monsters of us all…”

There is nothing subtle about Guillermo del Toro’s Crimson Peak.  Every aspect of it, from the sweeping score to the elaborate costumes to the ornate set design to the gruesome climax, is elevated, ecstatic, and over the top.  Some people have seemed surprised by this, as though the director of Blade II and Hellboy has been all about nuance in the rest of his career.  Nope – what Crimson Peak is above all else is a glorious throwback to the extravagantly gothic horror movies of the 1950s and 60s., and to criticize it for being obvious is like criticizing water for being wet.  Even the movie’s big “twist” is telegraphed early, and the fun of the movie isn’t in the (nonexistent) surprise, but in knowing what’s coming and seeing how a master filmmaker plays his instrument to get us there.

Some plot: It’s Buffalo, New York, at the cusp of the twentieth century.  Edith Cushing (and there’s no way that surname is an accident, given Peter Cushing’s prominent role in the horror films of Hammer Studios, which del Toro clearly adores) is an aspiring writer whose father Carter, a prominent businessman, views her aspirations with a sort of patronizing back-handed encouragement (he gifts her a pen, but is less excited when she tells him she wants to use a typewriter to mask her gender to potential publishers).  When Thomas Sharpe and his sister, Lucille, arrive in Buffalo from England to find investors for Thomas’ invention to mine clay, Edith is quickly taken with the dapper Englishman (and he with her). 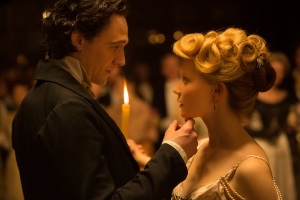 Things happen.  A lot of things.  A lot of slow things.  This isn’t a criticism as much as a warning.  Those expecting to walk into a fast-paced, whiz-bang, thrill-a-minute phantasmagoria will be disappointed.  Del Toro takes his sweet old time to establish character, back story, and setting.  I liked it.  Many won’t.  It reminded me in some ways of the beginning of The Exorcist, where not much happens for a while in the service of world-building. There’s the courtship between Edith and Thomas.  There’s the pitch Thomas makes to Edith’s father.  There’s the lovelorn (and Carter-endorsed) McMichael, a friend of the family who pines after Edith. There’s a subplot with a private detective.  There’s a mysterious murder.  But none of it is scary and all of it appears to be in direct contradiction of the movie’s ad campaign, which paints the movie as a Gargantuan Thrill Machine.™ 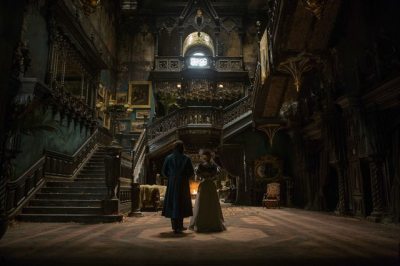 Instead, as Edith arrives at Allerdale Hall in rural England as Sharpe’s new bride, we get more slow burn.  Only this time, instead of exposition, it’s all in aid of amping up the creep factor.  See, Allerdale – nicknamed Crimson Peak for the way red clay seeps, blood-like, through the snow-covered ground in winter – is another in the long line of wind-swept, desolate houses that populate gothic horror stories.  And man, is it ever gorgeous.  Designed by Thomas E. Sanders and sumptuously shot by Dan Laustsen, Allerdale is a dilapidated beauty, all ornate carvings, winding staircases, clanking elevators, and soaring ceilings that have given way to the elements, allowing it to snow inside.  And now Edith finds herself tucked away in this remote house (we’re told it’s a four-hour-walk to the nearest village), getting acclimated to life with her husband and his sister, a distant, suspicious woman who constantly looks at Edith out of the corner of her eye like she just opened the fridge and smelled something rotten.  Things go bump (and worse) in the night.  The walls seep red clay like blood and Edith is warned never to go into the basement.

It’s an odd movie that I can see a lot of people being dissatisfied with.  It starts slow and doesn’t pack a lot of scares.  It is, in many ways, a conventional horror story, which seems odd coming from the director of Pan’s Labyrinth.  The broad, sweeping melodrama can be off-putting if you don’t understand what del Toro is trying to do tonally.  But I found there to be a lot to love despite its quirkiness.  The trio of Mia Wasikowska, Tom Hiddleston, and Jessica Chastain is immensely fun to watch – especially Chastain, who digs into her character with her usual ferocity.  Del Toro successfully mines some of the same thematic material as in his 2001 masterpiece The Devil’s Backbone, while also exploring the dangers of loving too much.  And of course the whole thing is visually impeccable.

And yet.  It feels like there’s another, weirder movie in here that ultimately might have been more successful.  The impression I got is that by chaining himself to the characteristics of the movies he was playing with, del Toro forgot that the most successful movies ultimately transcend the tropes of their genre.  It seemed for a while that we were going to get a del Toro-ian riff on gothic horror movies, but instead we got a gothic horror movie that merely settles for looking like a Guillermo del Toro movie.  It’s entertaining, to be sure, but by now del Toro has conditioned us to expect more.

Manic Street Preachers – Everything Must Go (1996)