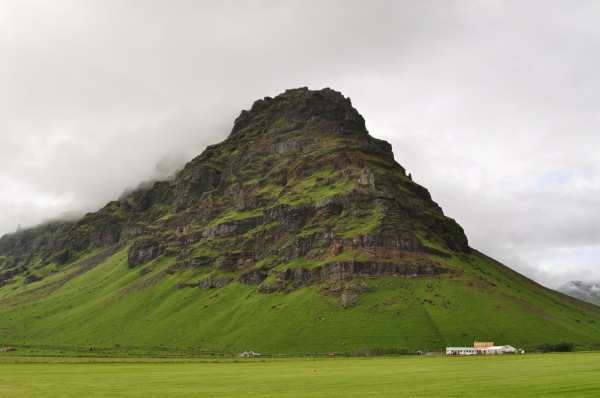 After Pingvillir (and a quick stop at the gift shop for travel snacks), it was time to head south to the Ring Road.  As I mentioned in my previous update, the Ring Road circles the entire country – it’s the thoroughfare everyone uses to get where they need to go, and for this first serious leg of our journey we were headed east to Vik, a tiny town on Iceland’s south coast.  One thing immediately became clear: Pointing out every beautiful thing we saw would quickly leave us with laryngitis.  It wasn’t uncommon to be cruising along and just happen upon a sight like the one above, a little farm hanging out at the foot of a magnificent hill.  But that’s what the drive was like for much of the day.  Flat land to our right (the ocean just out of sight) and imposing cliffs frequently punctuated with waterfalls to our left. 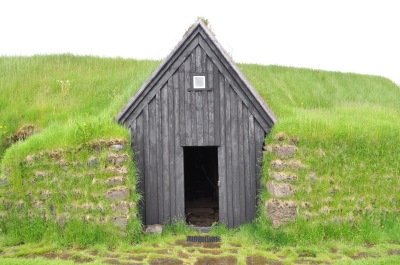 Our first stop of the day, after winding several miles back an unpaved road, was Keldur, location of the oldest turf homes in Iceland (which, yes, also sounds like something Clark Griswold would have taken his family to see in National Lampoon’s Vacation).  Projected to date back to the 11th Century, this was one of our surprisingly rare glimpses into ancient Iceland, and it’s all been well restored (and preserved – we were required to wear crime scene booties in the house), as evidenced by the small church now on site. 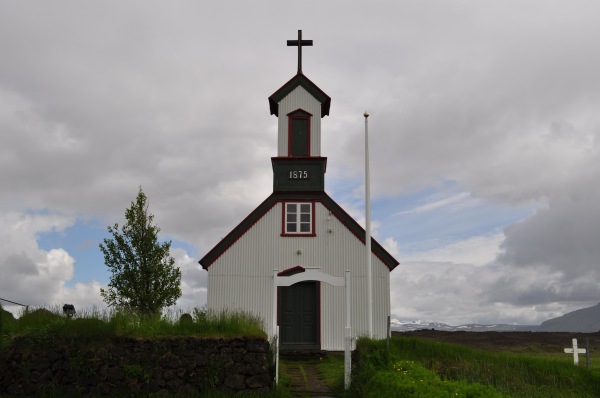 As we were getting ready to leave, another couple approached us outside one of the turf homes, and the woman asked in broken English if we wouldn’t mind giving them a ride back down to the Ring Road.  Icelandic hitchhikers?  Don’t mind if I do!

After dropping our new companions at a gas station in Hella, we breathed a sigh of relief that we hadn’t been butchered for our car, bought some truly heinous gas station food, and then sent off for the first of the day’s two scheduled waterfalls.  We could see Seljalandsfoss from a distance, so far away that it appeared to be just a trickle of water slipping over the edge of a cliff.  Over the course of the next five(ish) miles, the scale of the falls revealed itself.  One of us might have whispered, “Holy shit.” 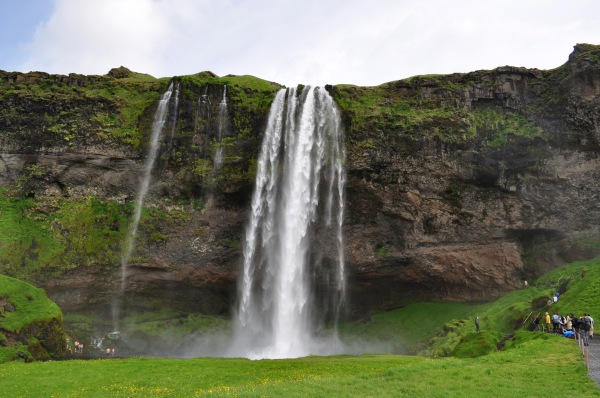 The best thing about Seljalandsfoss is that you can walk all the way around it (which you can sort of tell in the above photo, if you haven’t been too distracted by the insane people swimming in the frigid water). 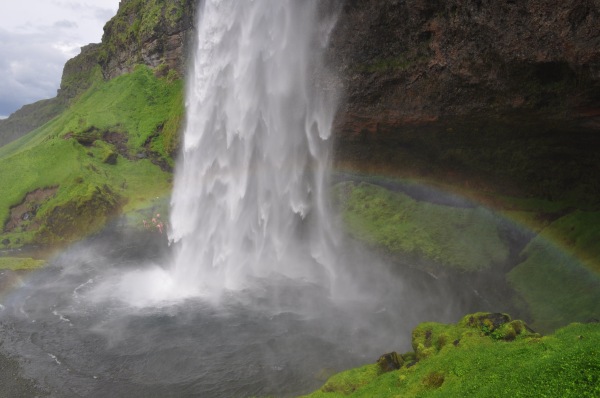 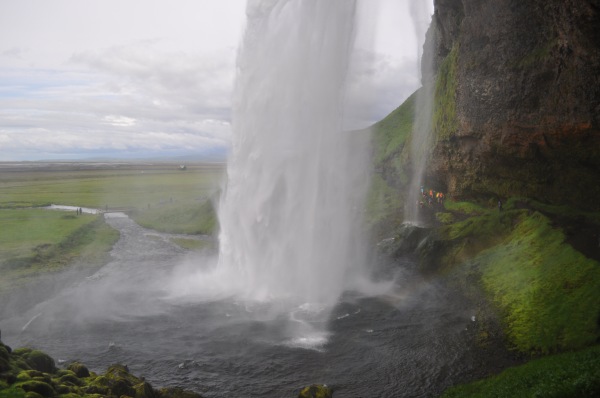 A little further down the road we arrived at the powerful Skogafoss.  Like virtually every waterfall we encountered, you could walk right up to the base of it … 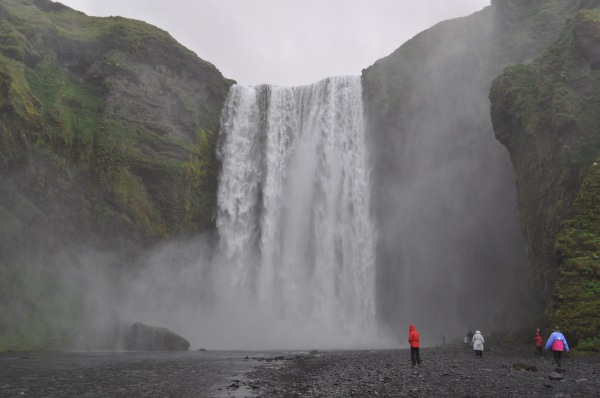 … and, in most instances, there was access to the top of it, too. (And if you were lucky you found a rock formation that resembles your own profile, like I did below.) 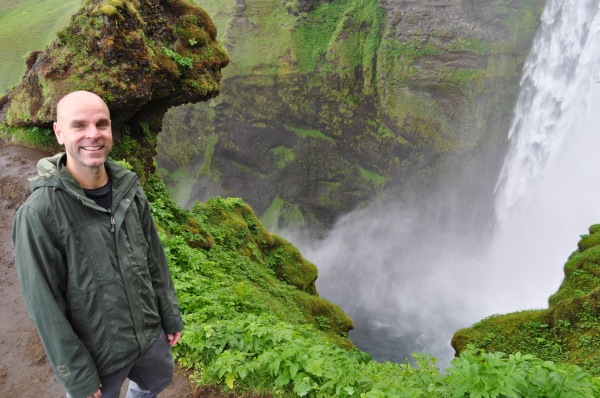 For reference, check the looooooong set of steps winding up to the top of the falls in the photo below. 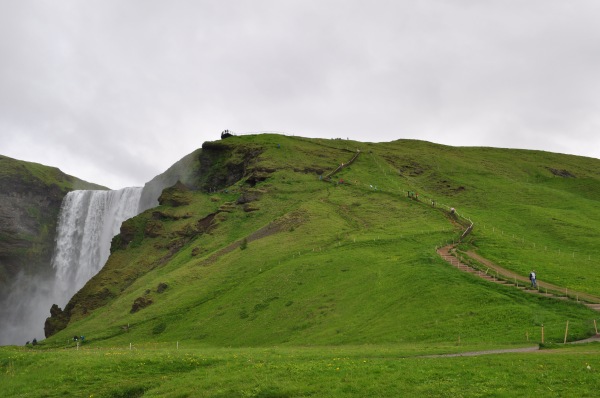 Amanda and I both observed that Iceland is similar to Ireland in that they don’t seem to be particularly litigious – or at least aren’t as terrified of litigation as their American counterparts.  At Skogafoss, as at every other falls we visited, there was a solitary warning sign – you know, something like, “Fall and you might die” – but that was about it as far as security went.  And, wonder of wonders, no one seemed to be falling and/or dying.

On to Vik.  With fewer than 3,000 people, it’s mainly a coastal stopover for tourists in the summer, roughly halfway between Reykjavik and towns like Höfn in the Eastfjords.  It sported an N1 gas station (our go-to chain), a couple restaurants (where I had my first taste of Icelandic fish stew), and not much else.  That didn’t stop it from being intensely beautiful, especially as a massive wall of fog rolled in off the mountains toward the ocean. 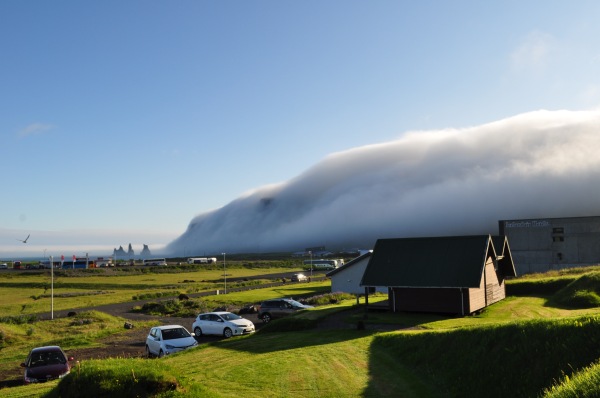 Vik is also notable for being near two very cool geologic formations.  The first is Reynisfjara, a series of basalt columns on the edge of the North Atlantic. 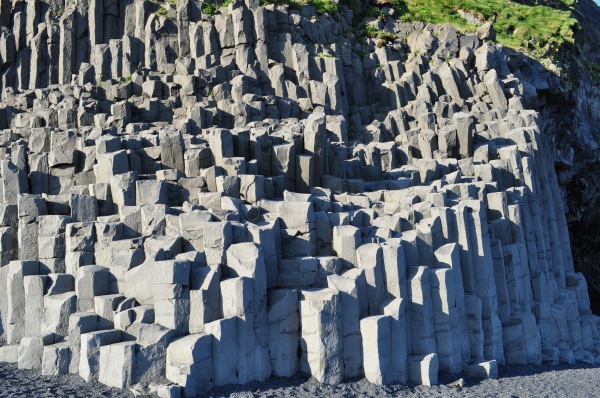 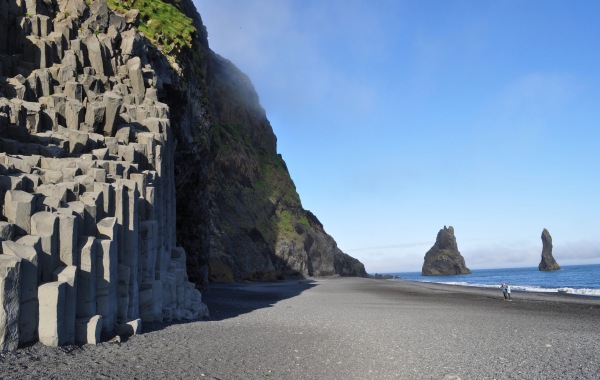 To help with the geography of all this, the two rock formations in the previous picture can be seen from a distance in the photo of the fog rolling in.  We’re talking maybe a ten-minute drive, and that’s only because it wasn’t a straight shot.

A further ten minutes brought us to Dyrholaey, a pair of arches that looked extra impressive with the added fog.  This was taken from Reynisfjara, because when you actually drive up to Dyrholaey, you’re too close for the photos to amount to much.  Weird. 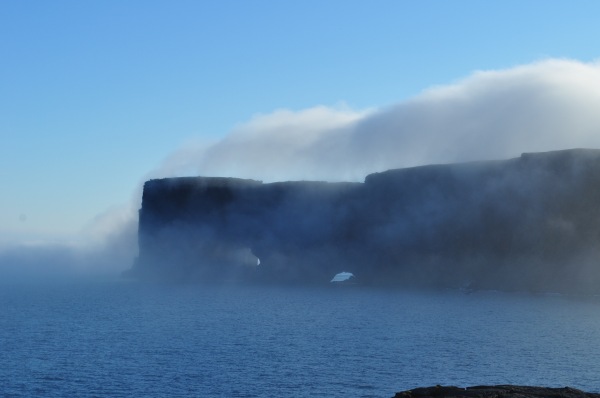 At this point it was 9:30 p.m., which you can clearly tell from the dazzling sunlight in all these photos.  After a long day and still feeling a little jet-lagged, it was back to our spacious accommodations… 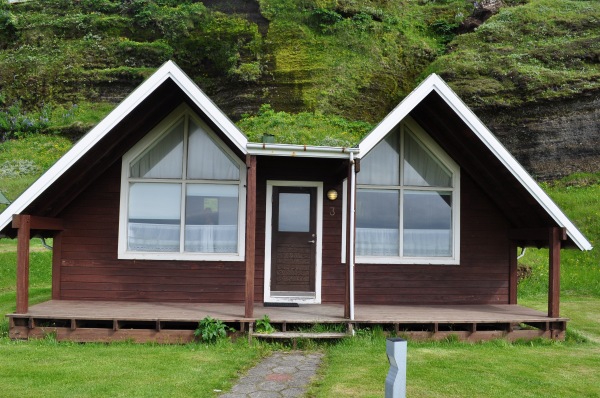 … where we jerry-rigged another Rube Goldbergian contraption to minimize the daylight and fell into an exhausted slumber.

When people think of Iceland (if they think of it at all), I’m guessing they picture it in the same way we did prior to our visit: a land of waterfalls and glaciers and mountains.  (And whimsical singers, but that’s just the music nerd in me asserting himself.)  But the below photo is what greeted us as we made our way east along the Ring Road after leaving Vik. 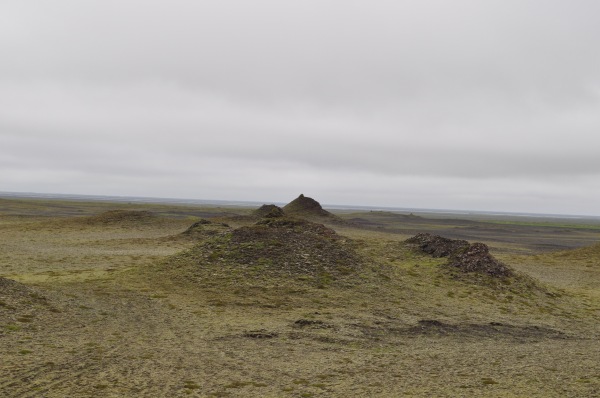 It was a low, gray sky that accompanied us for most of our morning drive across what could charitably be referred to as a postapocalyptic wasteland.  But somehow that only made it even more impressive, more otherworldly.  These lava fields were related to the ones we’d seen on the first day near Reykjavik, but the combination of cloud and fog and intermittent rain brought home the extreme desolation of the landscape in which we were traveling. 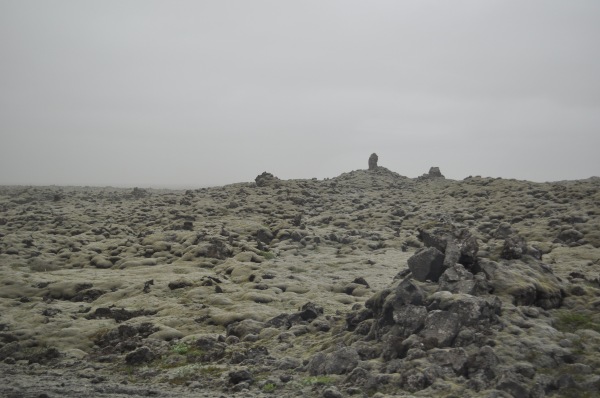 But the desolation didn’t stop people from playing with the rocks. 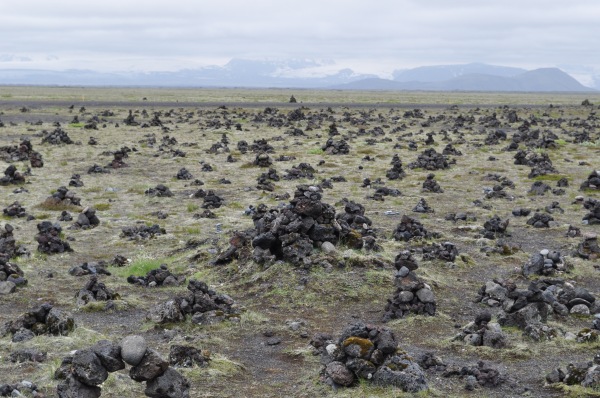 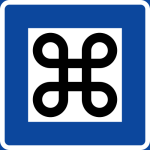 One additional thing Amanda and I picked up on (in addition to the fact that Icelanders don’t seem to be a bunch of lawsuit-happy dumb dumbs) is how well-marked the country’s natural attractions are.  If we ever passed a road sign sporting the symbol to the right, we usually made a hard turn and followed the sign wherever it was leading us.  It often meant we’d be traveling down some hair-raising, single lane, unpaved roads, but whatever was waiting for us at the other end was invariably worth the effort.

And so it was with Fjadrargljufur.  We weren’t sure at first.  It was 10km back an unpaved road, and I could only cross my fingers that the Auris was up to the trip.  And when we got to the parking area, it didn’t look like any big deal.  A narrow track leading up a gently-rising slope – probably a nice walk, but the country had no shortage of nice walks.  We resolved to give it ten minutes before turning around and heading up the road.  What could possibly be on the other side of the hill? 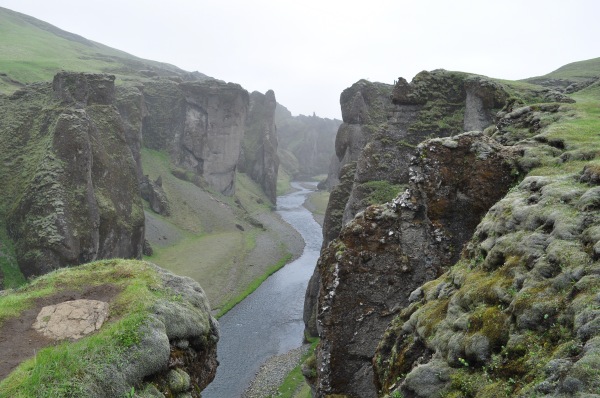 At the crest of the hill, a huge valley opened up beneath us.  We walked for another half hour, and even at that point the trail still meandered off in the distance.  Of all the unplanned and unscheduled spots we discovered, Fjadrargljufur was without question our favorite – one of those happy accidents that occurs when you’re willing to risk a flat tire in the pursuit of a memory. 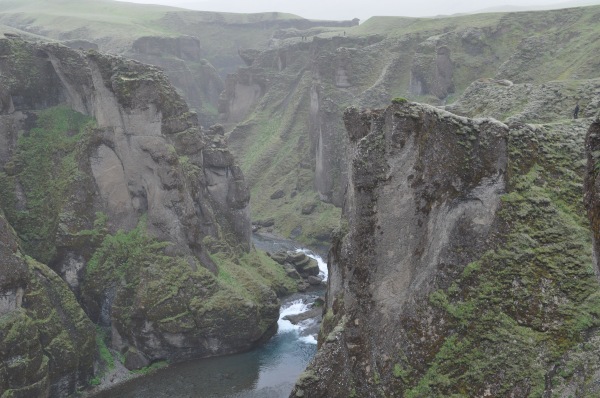 Up next: Höfn (by way of the Jokulsarlon glacial lagoon) 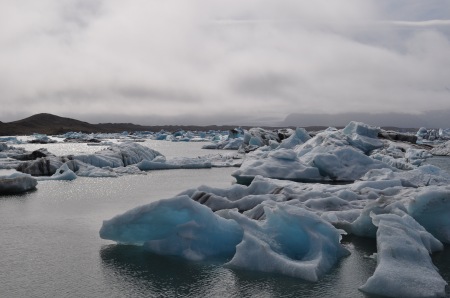