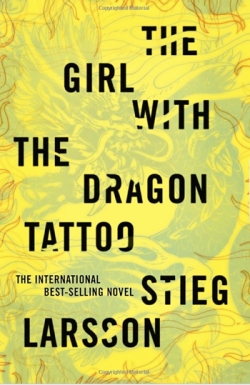 I resisted this one for a long time.

It got to the point where even my bookshelf was ashamed of me. Every time I’d peruse the titles to decide what to read next, I’d skip over the garish yellow-green spine as though to linger on it too long would turn me to stone. My reluctance was also reflected in the absence of its two sequels. No companions. Just The Girl with the Dragon Tattoo all by its lonesome several years past the point where anyone actually cared about it.

I’m not sure where my opposition came from. I’ve watched – and liked – both movie adaptations. I’m a fan of mysteries. I don’t have anything against Sweden. I knew people who thought the writing stunk, but not enough of them to dissuade me. I was also aware of the accusations of misogyny levied against author Stieg Larsson, but I figured if I could make it through American Psycho I could handle anything. (And, having seen the movies, I wasn’t necessarily sold on the misogyny charge in the first place.) More than anything, I think it just goes back to that boring old trait I have where if too many people like something, I figure it’s probably not worth checking out. My taste and the public’s rarely intersect, so whenever I hear that this book or that movie is the next big thing, I usually run screaming in the opposite direction.

So it was with some disappointment that I plucked The Girl with the Dragon Tattoo off the shelf as part of the 21st Century Bookshelf Deprivation Project.

Here’s the verdict: It’s not horrible.

But it’s also not good enough for me to spend much time on, especially considering that I’m probably the last person in the world to develop an opinion about it.

It is, however, probably worth addressing the two criticisms I mentioned earlier. As for the quality of Larsson’s writing, I don’t know if it’s his writing or the translation, but there’s no question that The Girl with the Dragon Tattoo features, without fear of hyperbole, the most graceless prose I’ve ever read. It’s a minor miracle that anyone makes it to the heart of the story – the decades-old murder mystery that embroils disgraced journalist Mikael Blomkvist and hacker wunderkind Lisbeth Salander– because to get there the reader has to wade through a turgid swamp of some of the most tedious passages ever rendered in the English language. It takes a hearty soul to bear these godawful descriptions of Swedish courts and corporations which are sometimes related in interminable paragraphs and other times – I guess for variety’s sake – in stilted dialogue that still runs without end but is witlessly broken up with superfluous “I see”s and “You don’t say”s. Things pick up when he gets to the mystery, but Larsson’s writing is never more than serviceable.

The misogyny question is trickier. I get where the accusations come from. I do. About a third of the way through the book, long before she actually meets Blomkvist and gets involved in the central mystery, Lisbeth Salander is subjected to a gruesome rape (redundant phrasing, I know) that really doesn’t have anything to do with the story. It serves, I suppose, as a way of revealing her inherent toughness and resilience, but the whole scene could be excised from the book without the risk of losing anything.

Throughout the rest of the book, Salander is unequivocally the strongest character we encounter: smart, independent, resourceful, and generally better at everything than Blomkvist, our supposed protagonist. So does one scene where Salander is portrayed as the victim of a hideous crime – a crime, by the way, for which she absolutely gets revenge – outweigh the rest of the book where she’s clearly the best character in a story full of bad ones? Not for this reader, even though I’m sensitive to the treatment of women in pop culture (and, y’know, life), and I’ve written previously about how ill advised it is for men to think they have anything worth saying on the subject of rape. For me, the misogyny accusation just doesn’t wash, not when Salander is depicted as more honorable and worthy of emulation than all the men in the book combined.

And it’s Salander, by the way, that actually has me looking forward to reading the next two books in the series, despite that fact that doing so will subject me to more of Larsson’s tortured prose.